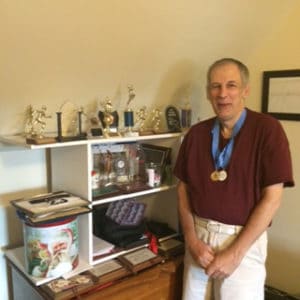 Carl Spangler flashes a shy smile as he sits in the press room at the Lancaster Barnstormer’s Stadium. Wearing a blue t-shirt and ball cap, which he frequently lowers to cover his face, he still can’t master the skill of trying to hide his beautifully straight teeth.

Spangler, a humble 56-year-old man, is preparing to run his 21st Red Rose Run in Lancaster on June 6th. He has been running for 36 years and has logged more than 5,080 miles in races alone. He has all of the stats memorized – where he has run, how many miles, what his time was … he is able to spit off his best times for different races straight from memory.

He runs simply because it’s “good exercise” and because it makes him feel “good.”

Spangler, who lives in a Keystone group home in East Petersburg, has run 11 marathons – his best time being 3 hours and 13 minutes in Chambersburg, Pa. He follows a strict running schedule – 2 miles Monday thru Thursday around 3 o’clock in the afternoon, making sure to always take Fridays off.

Today, he sits calmly while tapping his white-sneakered feet as he staples Barnstormers baseball tickets to flyers as part of the work he does for Excentia.

Brock Minnich, volunteer coordinator for Excentia, said Spangler is a dedicated, hard-working man who is pleasant to be around.

Spangler appeared uncomfortable talking about himself, simply stating that his running ability must be due to “good genes.” He has a routine of eating a big plate of spaghetti before each race.

At home, he has a shelf full of trophies and plaques, proudly displayed in his second-floor bedroom. He goes through each one, remembering where the race was held and the year, even though some of the trophies don’t have that information listed.

Karen Krueger, Spangler’s house supervisor, said his running is a good social outlet for him.

“He has a lot of racing friends who he’s run with for years,” Krueger said.

While Spangler is more than just a runner – he also enjoys bowling – it is his running that attracts attention from others.

“He’s the star,” Krueger said, adding that he has about 5 friends who will be watching him race in the Red Rose Run this year.

The 39th annual Red Rose Run starts at 8 a.m. on June 6th, for those interested in cheering Spangler on throughout the course.

As the youngest of five siblings, Bennett always loves tagging along for family activities. In his early years, nothing seemed concerning with Bennett’s development.

Fine motor skills describe a child’s ability to use their small muscles, such as those in their fingers, hands and wrists, while

As the youngest of five siblings, Bennett always loves tagging along for family activities. In his early years, nothing seemed concerning with Bennett’s development.

Fine motor skills describe a child’s ability to use their small muscles, such as those in their fingers, hands and wrists, while coordinating with their

Updated 3/9/21 Excentia Human Services stands in support of COVID-19 vaccines and strongly encourages all employees, people we support, and community members to get a

Made with ❤ by sparrow websites